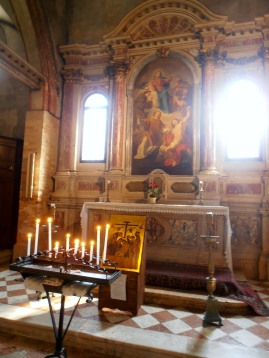 What I love most about a space or a place is the way it fills with light, and the sunsets in Venice are so unreal, we don’t even try to capture them on film. Before I came here, I was told navigating the floating city is next to impossible. Just throw the map away, a friend advised, but I hadn’t believed her. She was right, though. The street signs are nonexistent. The dead-ends are rampant. The only way to get where you are going is to follow the crowd. And the churches—of which there are too many to count—become your beacons, your guideposts, your landmarks.

Venice is magic, said the same friend. And it is, but it’s also a hotel right on the street, walls thin as foil, which shake into the night with every passing bus. The window falls out on top of me, then won’t go back up. The toilet stops working. The metro is running late. At breakfast, two cups of coffee and four shots of espresso are at once too much and not enough. But it’s already mid-day, and Venice is sinking, so onward we go from Venezia Mestre (the mainland) to Venezia Lucia (the island) on a train that implausibly runs right over the water. Okay, so Venice is still sort of magic.

We disembark and cross canals and jump into the herd moving up and around the island, in search of St. Mark’s. On the way, we pass a shop that sells melting clocks a la Salvador Dalí, and more papier-mâché opera masks than I’ve ever seen, and when we come upon a window display of Betty Crocker cake mixes, I have to stop and take a picture. My brother asks me why, and I say, Because it’s funny, while I think, Because here, this is the strange thing. When we get to St. Mark’s Square, after being so long in the shadows of narrow streets, the amount of sunlight in the open is blinding.

St. Mark’s Basilica is nothing but gold, and entering, I suddenly feel thrust into Byzantium. I look at the swarms of people all around me, and I wonder why they’ve come here, what they feel about God—if they feel anything at all. As has become my habit in cathedrals, I crane my neck to stare and stare at the ceilings, and I understand how they could make someone feel closer to heaven. Even as we move forward, I stare up, note the rays of light that come pouring in the high side windows. And I wonder how anyone could be in a place like this and not feel something about God.

We step outside, into the blinding bright, once more. One of the countless churches, San Giorgio Maggiore, is on an island off the island, accessible only by water bus. I’d had it on my list of sites to visit, but when it comes to it, we’re too worn and weary to figure out yet another mode of transportation. So we walk around the Doge’s Palace, sit on the edge of the water, and look across the Adriatic, across a cluster of blue boats, to the church that houses Tintoretto’s Last Supper. The late-day sun bounces off the white marble walls. I tell myself, This is enough, and somehow, it becomes true.